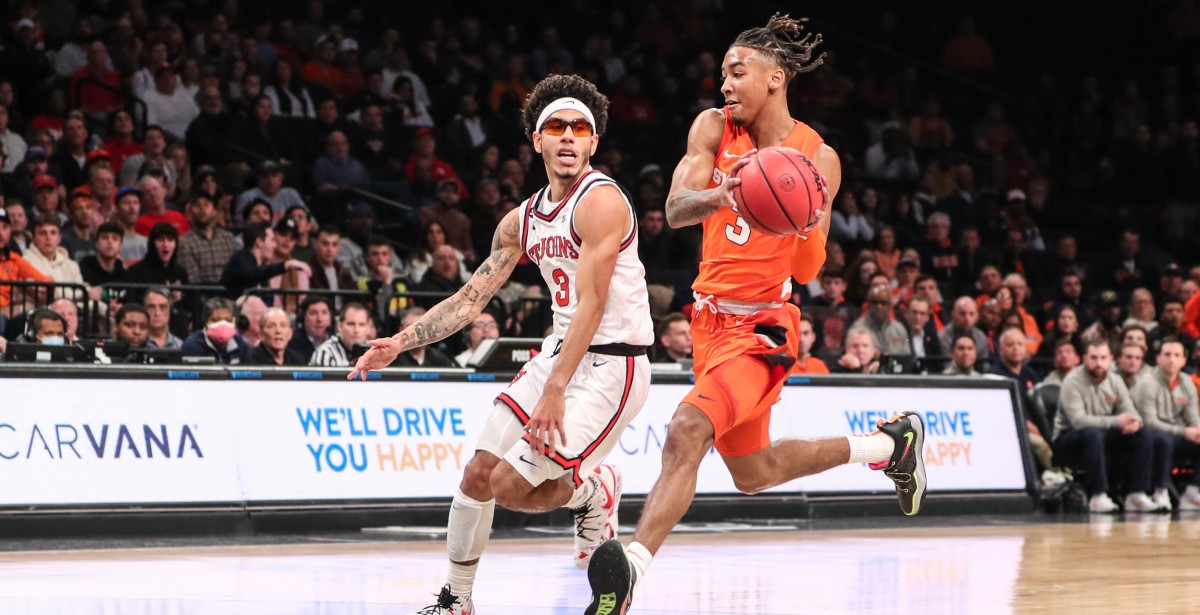 Syracuse basketball lost in overtime 76-69 to St. John's in the Empire Classic Championship Game Tuesday night. Here are five takeaways from the loss. 1.

Mike, any idea if something’s going on with Girard’s conditioning? A person who gets to the Dome early said a couple games ago he thought Joe was wearing a wrap around his mid-section, he could see it when he lifted his shirt. I think it’s a little too easy to call him lazy. I know he has had issues with asthma before. Scheduling the Northeastern game on Saturday when we had games in NYC on Monday and Tuesday might not have helped us in the second half last night when we noticeably tired.
M

I wonder about Joe’s conditioning. He doesn’t look as out of shape as two years ago, but he isn’t trim either. I think he was totally out of gas.
Hima is a pleasant surprise. I saw him last year at Duquesne and know people close to that program….while I think his ceiling is still not the highest, his floor is better than I thought. Still think they’ll badly need portal help next year, but that was encouraging for sure. Benny flashed his potential; now can he sustain and then build on it? Judah will be interesting to watch. There’s no way he will be NBA ready next season, but he already scares me in that regard. He needs at least 2 years to make that move successfully.
I don’t think St. John’s is very good, but regardless it was nice to see SU play a lot harder than they had.
I really am baffled by the use of the bench in these games. Copeland doesn’t play one, Maliq and Taylor the other. Made no sense to me because I think it was similar competition. I think the tournament is as unlikely as ever, and it would be nice to see the young guys getting consistent minutes with an eye on the future.

I know most fans and national media are enthusiastic about Judah's play in NYC, but I was slightly disappointed. Maybe that's because I've always thought so highly of his abilities that nothing he did in NYC surprised me. I've always considered him a top twenty and maybe a top ten player in his class.

I think his offensive game in NYC became too one-dimensional, with everything being about getting to the rim. In his first couple of games, almost all his shots were mid-range jumpers. JB commented a couple times that he needed to get to the basket more. But what's been missing in his offensive game is the great balance and versatility he showed in high school as a three-level scorer--at the rim, with mid-range jumpers off a variety of moves, and a three-point shot.

Judah also was not much of a playmaking point guard in NYC. That could partially be explained by Jesse being on the bench and Joe's game being in the crapper against St. John's. But Judah has to get better at finding guys in good shooting position, whether a simple pass from out front at the right moment or when he penetrates. He's shown good development in finding Jesse when he gets in the lane, but not much of finding Joe or Chris for catch-and-shoot threes. Chris hit three buckets off the dribble in the first half of the St. John's game, which is about the total number of buckets I saw him get off the dribble in more than a dozen high school games. It's great he's developing that, he needed to. But the strength of his game is catch-and-shoot threes, and it's part of Judah's job to get him more of those.

One other minor quibble--Judah's playing style seemed like it was from a couple decades ago. One on one, often with lots of dribbling and slow ball movement. In today's NBA, decisions are made quickly and the ball moves quickly. That was an even bigger problem with Quadir's point guard play in high school-- too much dribbling for too long, with little teammate movement happening.

Overall, Judah was really good in NYC. And his defense was excellent, as I expect it to be, and not like the much weaker defense he had been playing before NYC. It's great to have an exciting Syracuse player who's created some well-deserved national buzz. But as good as Judah has been so far, there is still a lot of room for improvement in his game. I think he has the abilities and the smarts for that to happen fast.
R

I think we have some upside with several guys on the team. The freshmen should continue to get better with experience and Benny, too. Watching Joe, I don’t think he has a conditioning problem, but he does have that asthma issue and not sure how it is for him when it acts up. Having said that, we need him to be more like the player he was against Richmond and less like the player he was vs. St. John’s. Would also like to see Boeheim sub more in the 2nd half of a game when we are playing back to back and our guys obviously need a blow.
You must log in or register to reply here.
Share:
Facebook Twitter Reddit Pinterest Tumblr WhatsApp Email Share Link
Visit the Sports Illustrated Syracuse site
Top