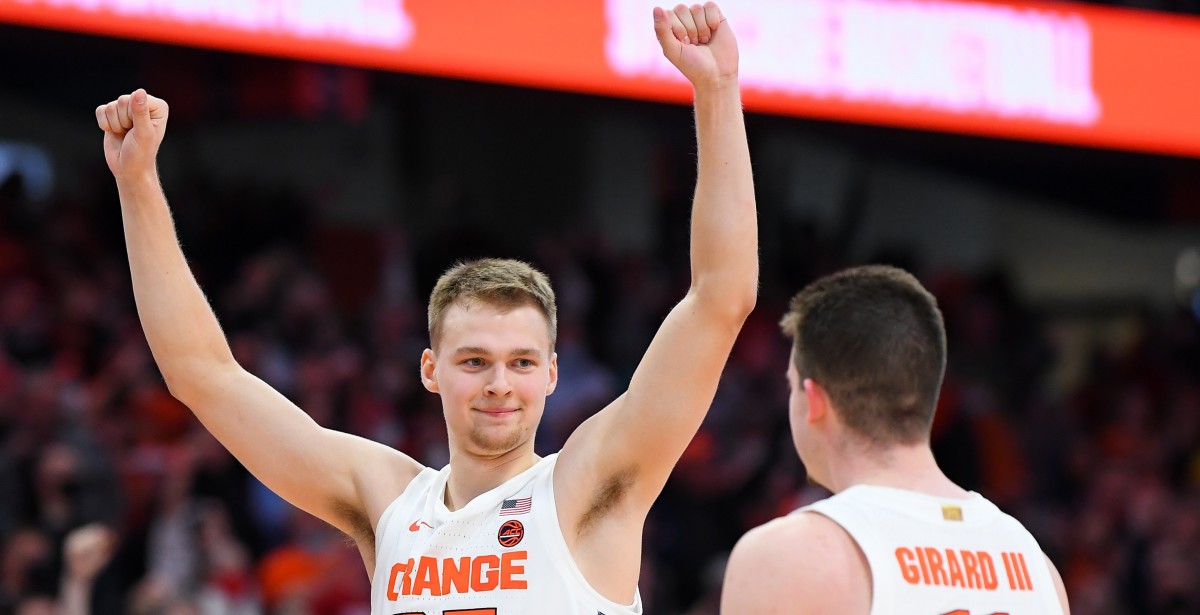 What to make of the Orange's double overtime victory over the Hoosiers.

I needed a shower after that game. Still don't know how we won, looked like Colgate again, big early lead and then get beat badly the rest of the game. Besides the many big plays, I can't remember SU fighting and diving for so many loose balls. We really played hard. Frank was fighting like crazy for the ball in the OTs.

One plus is that I think we still can improve offensively, yet we scored 88 in regulation and kept up that pace with 24 OT points even with Jesse out. We can put points on the board, even when three pointers from Buddy and Cole are limited again. And as Mike points out, there's still room for improvement from Joe in the bad turnover department.

On the negative side, we are still a pretty bad team defensively, and I'm not sure we have the personnel to make the big improvement needed. We had to fight like hell to beat a team outside the top 25 on our home court and scoring 88 points in 40 minutes. We have to get better. We need consistently strong offensive games from Swider, along with improvement from the three bench guys.

Why does Jesse get called for over the back fouls while Jackson-Davis steamrolled Benny from the back with no call? And why was Benny there in the first place? As they were lining up, I watched Benny get paired with Jackson-Davis and couldn't believe it. Swider came over for a second like he wanted to be there but JB wanted the skinny freshman who has been struggling to keep a rebound from an unstoppable beefy veteran big man. Swider or Frank should have been there, a terrible decision by JB no matter what he says. And of course he calls out Benny for the mistake when the mistake was by him.

All in all, it was a great and memorable win. Need to get two of these next three. Florida State seems a bit of a mess right now, with their always tough D giving up 93 last night to a great Purdue team. Let's go down there and steal one.
You must log in or register to reply here.
Share:
Facebook Twitter Reddit Pinterest Tumblr WhatsApp Email Share Link
Visit the Sports Illustrated Syracuse site
Top