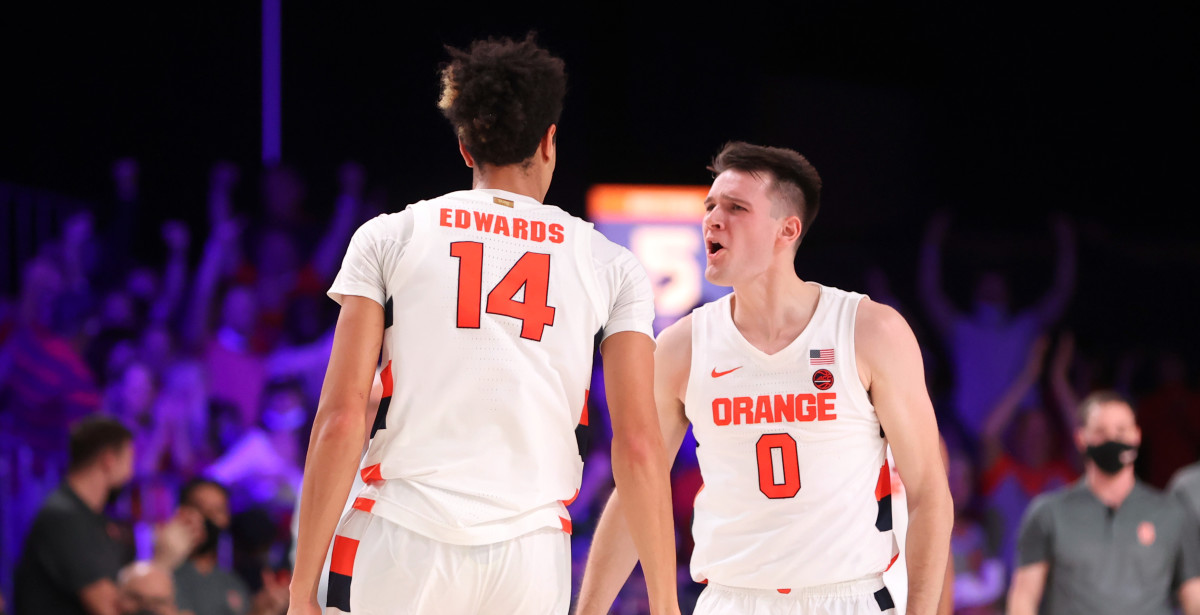 What to make of the Orange's win over the Sun Devils.

Great to see Cole shoot with confidence and not pass up clean looks on catch-and-shoot threes and opt to put it on the floor instead. And poor DJ Horne, #0. Buddy abused him in the first half and Hurley mercifully switched to a different defender on Buddy in the second half. Buddy has become very adept at using his strong upper body to body up on the defender and driving him back into the paint. He also made four great assists in the paint in the second half, a rare sight in the past. I'd still like to get him a few more good looks from three.

Right from the top, the game felt like a normal game against a normal team. We should win most of those. The last two games, we played teams at the extremes--Colgate's offense with lots of good shooters spreading the floor and moving the ball quickly with the pass really exposed our lack of quickness at guard, and VCU with in-your-face defense all game exposed our ball handling and lack of a true point guard. ASU is like the majority of the teams we'll face in the ACC, probably with a little less talent than most. They were on the soft side on defense, giving us the space to run our stuff. It took Hurley an hour and a half to remember we don't handle pressure defense well. Even a bit before they began pressing, they started playing up on us more.

The biggest concern still is handling pressure defense. We melted as soon as they went to the press, having to call two timeouts soon after they began using it. Jimmy is a big help in handling the press, but he's not quite the ball handler Marek was. In the olden days, the two guards were the best ball handlers on a team and used to break the press. Even with Girard lacking the agility and handle to quickly bounce back and forth to shake defenders, Buddy does not help a lot against the press. But the press isn't the only concern. Any team that plays a tight man to man will give us trouble running our offense and getting the shots we want. If I were an opposing coach, I would put a top defender on Girard and tell him to stay in Joe's face for 90 feet and for 40 minutes and keep our offense from getting in any kind of a rhythm.

But this was a good win and a huge one. Today will be a lot tougher. Hopefully Jesse can stay out of foul trouble against their beefy big man and give us a chance to win.

We need to be more active in 3 point defense
T

OrangeExtremist said:
We need to be more active in 3 point defense
Click to expand...

Yes, a lot more. Much worse than last year so far. And our zone is not producing the turnovers and runouts that it has in the past.

ThePearl said:
Yes, a lot more. Much worse than last year so far. And our zone is not producing the turnovers and runouts that it has in the past.
Click to expand...

The top of the zone looks very lazy to me. Need to get out on shooters
R

OrangeExtremist said:
The top of the zone looks very lazy to me. Need to get out on shooters
Click to expand...