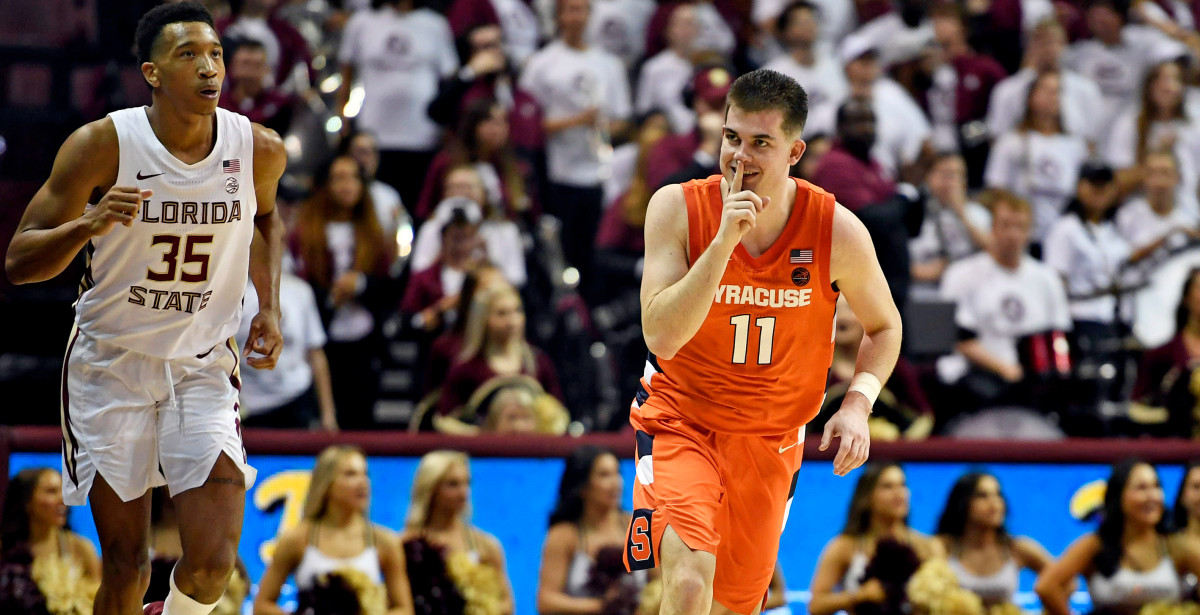 What to make of the Orange's win over the Seminoles.

Never imagined we could win a tough road game with Buddy scoring six points. The demise was definitely exaggerated and I am officially off the ledge and heading back to the very optimistic view of the team I had before the season.

Swider must lead the country in in-and-out threes. He shot 4-13 from three but they were good looks and many looked like they would go down. They'll start going down at a higher rate soon. Swider also had the play of the game--a wink to the SU bench before he stepped to the line having to knock down late free throws. Loved it. He's getting his swag.

Love Joe's swag too. He's looking more and more like GMac, very confident in late game situations. That's the guy we thought he would be. He'll never be a creative playmaker but if he can minimize the turnovers like yesterday it will help. GMac often played alongside ballhandlers like Billy Edelin and Josh Pace, Joe looked good alongside Symir yesterday. Jesse was getting the ball too far out early in the game. Jimmy missed a few inside early that he should've made, looked a little skittish. Made those down the stretch.

Still puzzled by why the only shots Buddy gets are shots he creates for himself. As good as he's become off the dribble, he's not Carmelo. Nobody's going to give him clean looks from three so we have to help him get some by setting screens, something that has become increasingly rare in our offense. Buddy looked pretty darn good in the middle of the 1-3-1 and also when we dropped him to forward in the 2-3 for a short while. Never though we'd see that. But I hope it's not one more way of squeezing minutes from Benny. Sy seemed out of place in the middle of the 1-3-1, just too small and he plays low to the ground, which is better suited for playing tight to a dribbler.

I have become concerned that Boeheim is losing Benny and he becomes a great player for another school. Benny's game performance hasn't warranted additional time, but Boeheim's criticism of his play after every game is probably a shock to him. Not all kids handle it well. Benny sits on the bench between JB and Red and doesn't seem to cheer much. That's been concerning in regards to his mindset. But yesterday he was on the other side of Red away from JB for a few minutes and he was up cheering along with the other players. He jumped off the bench when Jimmy got by his guy for a bucket for a second consecutive drive in the second half. Maybe being sandwiched between two coaches is what keeps Benny less demonstrable on the bench most of the time.
You must log in or register to reply here.
Share:
Facebook Twitter Reddit Pinterest Tumblr WhatsApp Email Share Link
Visit the Sports Illustrated Syracuse site
Top