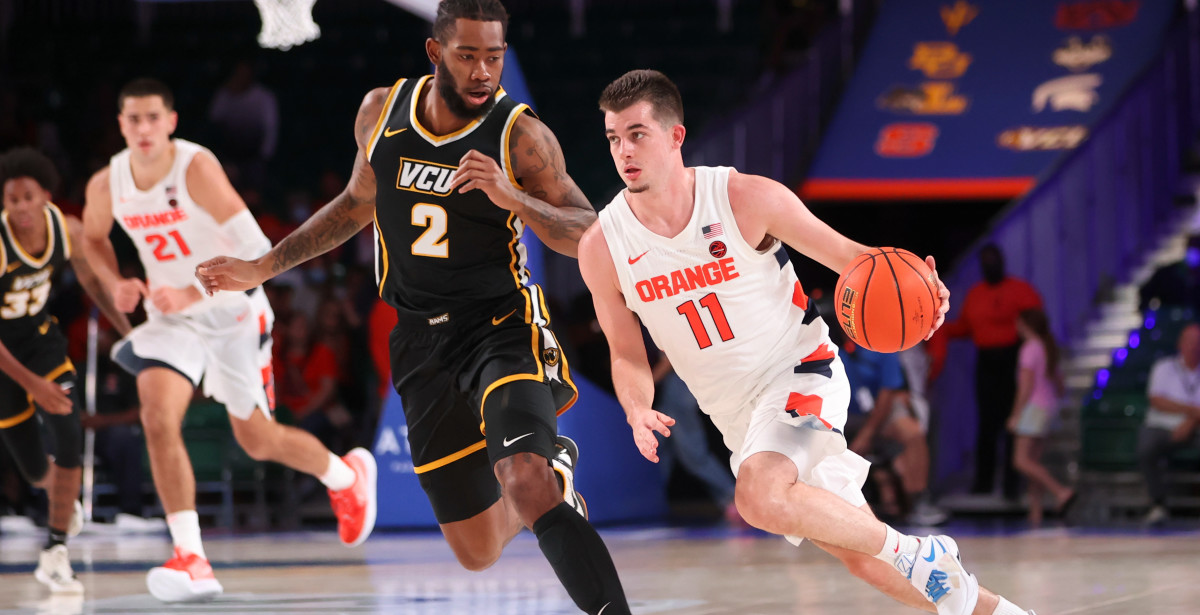 The Rams athletic, aggressive defense was too much for Syracuse.

This is the most unathletic team is Syracuse history. This is absolutely pathetic. We have a starting lineup of 5 slow and weak unathletic kids who should be at the YMCA. Who in the starting lineup can dunk besides 6’11 Edwards. Girard has no business playing at this level. I truly don’t care what he did vs Colgate or in HS. He can’t even bring the ball up by himself. Picks up his dribble in the middle of nowhere and chucks up miserable passes. Good thing we played him ahead of Kadary. This team will be Boeheims first losing season. I’ll gladly eat my words if wrong but unless they shoot absolutely lights out they stand no chance against anyone. Benny is the only athlete on the team but he is raw and can’t shoot. The talent drain has been apparent for years now.
C

I try not to post when I’m emotional about a game, but I’m truly nervous about this season. I usually have faith in Boeheim, the guy hasn’t had a losing season in decades and I was there in 03 so I’ll love him forever (and rsbecker I think you were too if I’m thinking of the right person, pm me) but our schedule is BRUTAL this year. Still have time to turn it around but this is the most down I’ve been that I can remember. Go Orange!
T

Looks like I was very wrong about this team. Among the many problems, the biggest is that we are playing without a point guard. For the third season and for possibly two more, our starting point guard is a 6’1” shooting guard who can’t penetrate and create, can’t defend, and worst of all he cannot dribble against pressure. He constantly picks up his dribble in the backcourt when pressured, then floats long crosscourt passes begging to be picked off. Also when pressured in the backcourt, he likes to dribble into the sidelines where he’s even easier to get pinned down. Point guards are supposed to be able to dribble, even against pressure. Pearl didn’t pick his dribble up once in three years and one of the greatest pressure defenses in history, Georgetown, gave up trying to press him because he would use the dribble to slice them up like a turkey. Put pressure on Girard and our offense will grind to a halt, yet our backup point guard played only four minutes. We have a long history of many illustrious point guards but we currently don’t have one.

Incredibly, a team that cannot shoot or score made more threes than we did. We don’t seem to be relying on using screens to free up shooters as much as we have in the past. Instead, Buddy and Swider are putting the ball on the floor a lot. Shooters like Andy Rautins and Trevor Cooney used to put a lot of miles on their sneakers by running around screens all game. Seems Buddy did also in past years. But now, Buddy and Swider are doing far too little catch and shoot, getting the ball delivered at the right time and spot after coming off screens to just go up with a clean look. It is the biggest strength of each of their games. Yet most of their shots are coming off their own dribble. I’m all for expanding their game by sometimes using their dribble to get an occasional midrange jumper, but they are not JJ Starling. They are elite three point shooters, they are not elite scorers off the dribble.

With the tough schedule coming up, if we don’t quickly get a lot better we will have little chance of the NCAAs. Luckily, the weak ACC this year might be able to keep the season from being a losing one. Hopefully we can turn things around.