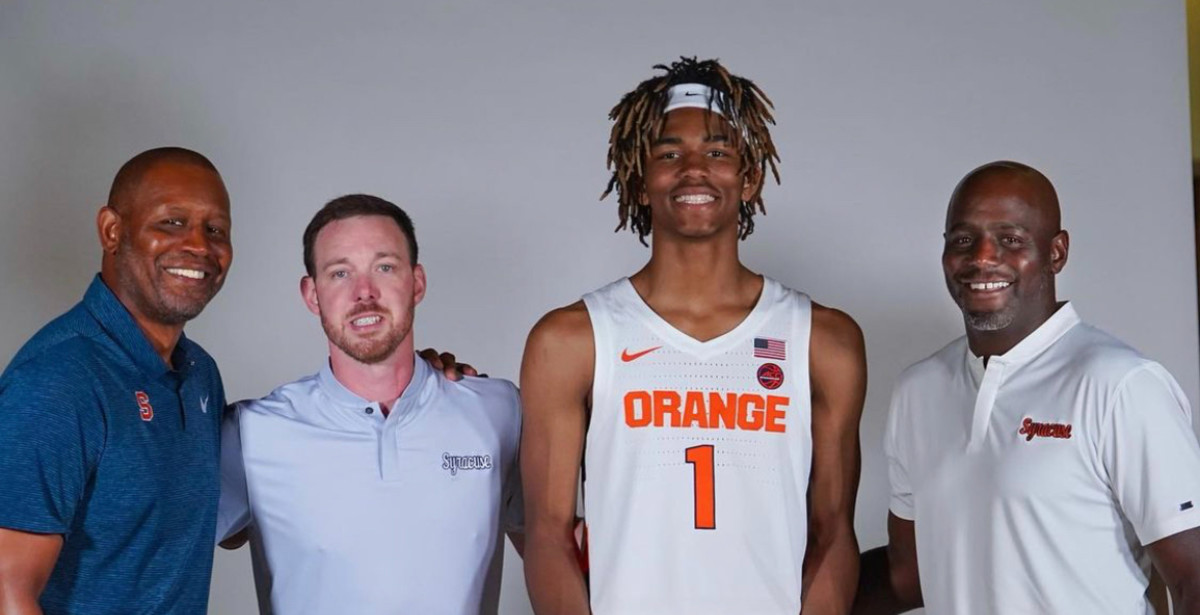 The Orange has one of the best classes in the country.

Gotta give the staff credit for this class, did a really nice job of setting up the program with a nice foundation / base of players for the future. Will have to supplement with some experienced guys from the portal assuming we lose Buddy, Cole, and Jimmy.
T

Cusealum05 said:
Gotta give the staff credit for this class, did a really nice job of setting up the program with a nice foundation / base of players for the future. Will have to supplement with some experienced guys from the portal assuming we lose Buddy, Cole, and Jimmy.
Click to expand...

Assuming Benny is back, Cole is not, and nobody transfers, I think we only need one player in the portal--a scoring small forward to pair with Benny in the starting lineup. I think JB intends to start Taylor immediately, seeing him as a plug-and-play replacement for Buddy. Seems like JB really wanted Justin, he even picked him up at the airport! Taylor is probably a more versatile player and better athlete than either Buddy or Girard were as freshmen.

I think Bunch will be the first forward off the bench if he's ready for that role. Pretty sure we won't want to start two freshmen, and Taylor's game is a little more well-rounded than Bunch's game right now. Maliq Brown and Bol would provide depth at forward. We will be set at center with Jesse and Frank, with Carey the third center.

Point guard is where minutes will be tight with Joe and Symir there. If Copeland develops enough so that we want him in the rotation getting minutes right away, then I think we could use Girard as the backup to Taylor at the two, freeing up some minutes at the point. If Copeland isn't ready, then we probably hit the portal for a veteran two guard. It's hard to know how any of the recruits develop this last year of high school. If Taylor isn't ready to start then we would have to get a starting two in the portal.

But I'm fine with a starting lineup anchored by returning vets Girard, Jesse, and Benny, along with Taylor and a quality forward from the portal who gives us as much as what we should get from Swider this year. Symir, Frank, Bol, Bunch and the other freshmen gives us plenty of talented depth.

I don't think we will lose any transfers at the end of this season. Only real possibility of a significant loss is Frank if he thinks he has developed enough to be a starter but feels blocked by Jesse. But he might have had reason to leave after last year and he didn't. He hardly played a minute last year, yet he was back at summer practice every day from the first practice on June 5, worked hard, got a lot better, and is an important part of the team this year.

The following year, I don't think Carey and Brown expect to play big minutes right away, but Bunch will expect to be in the rotation and Copeland might also. I think JB learned after last season's exodus to the portal that he needs to get certain freshmen some minutes right away if he wants to keep them at SU. But if a recruit ranked #90 in high school gets 21 minutes a game as a freshman and leaves anyway, as Richmond did, then so be it, can't please everyone. But I love this class, five guys with the potential to develop into starters, and most with a high ceiling.
You must log in or register to reply here.
Share:
Facebook Twitter Reddit Pinterest Tumblr WhatsApp Email Share Link
Visit the Sports Illustrated Syracuse site
Top